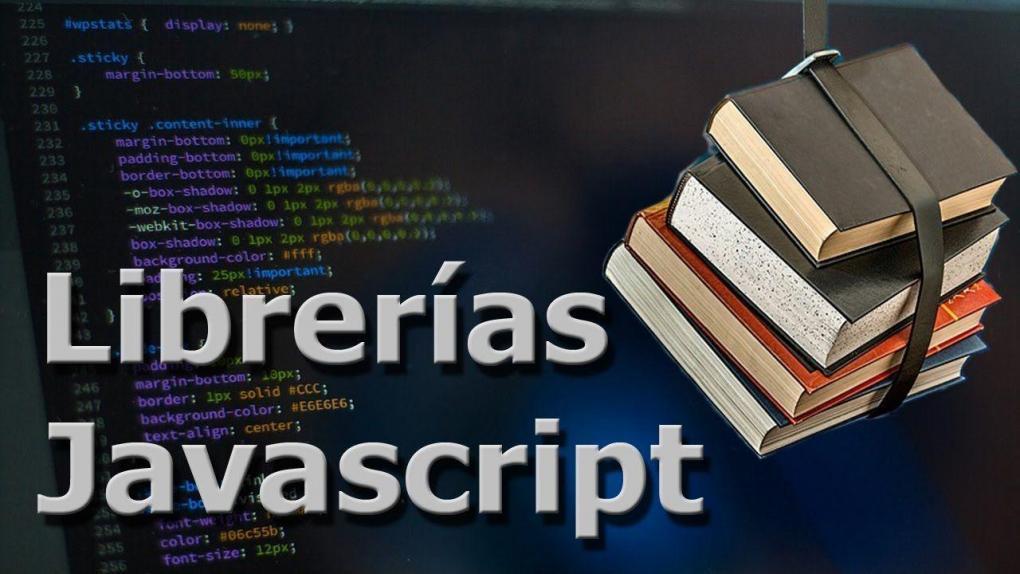 In this post we will present you the TOP of the best libraries and frameworks what can you find in JavaScript. ENTERS!

The world of programming It has always been in constant change, and that is why the terms "libraries" and "frameworks" began to be heard, which are technologies that were born to facilitate our work.

However, there is a lot of confusion between these 2 words as they are not the same.

The confusion comes because we both almost are used for the same purpose, and second: because frameworks use libraries, so when using a framework, we are using a library.

Difference between a Framework and a Library

A library is a piece of abstract code, which we can use for almost any need (includes functions and classes).

When we talk about frameworks we are talking about a complete structure with which to work; it could be said that it is an empty skeleton in which we can add our code.

Our code calls the library, and conversely, a framework calls our code.

I wanted to make these concepts clear before starting the TOP.

The best JavaScript libraries and frameworks

After apply a survey in various forums and Facebook groups well known, we collect information from the best 8 libraries and frameworks that have been made for JavaScript.

You will know a little about each bookstore, since if I present extensive details, this post would be eternal.

Let's go with the best 8 libraries and frameworks for JavaScript!

We will start by talking about the most popular JavaScript library, and probably one of the most used.

This library became popular in an era dominated by Flash Player, and was presented as an alternative to give life to our pages without the need for a heavy plugin.

Created by John Resig, his contribution allows us to easily manipulate the DOM, create animations, handle events and use the well-known AJAX technique.

It is free software and open source, in addition to containing licenses that allow it to be used in commercial projects.

This is a well known framework. It is a project maintained by Google, also open source.

It focuses on allowing us to develop under the model «View-Controller«, Which is nothing more than the separation between the logic and the user interface.

This framework extends the HTML adding new attributes, called "directives", and even lets you create your own.

Is a bookstore maintained by Facebook, and focuses exclusively on the creation of graphical interfaces, to work in turn with the "View-Controller" model.

This means that, for example, we can combine it with Angular, leaving it to do the logic, and use React to handle only the graphical interface.

ReactJS is very efficient in this sense, since it uses something called «Virtual DOM', Which basically means you have a copy of the DOM in memory, and you make changes to this virtual DOM and then apply them to the real DOM.

This sounds a bit complicated, but thanks to it it improves performance significantly.

Is a framework written using Node.js, and it integrates easily with MongoDB, and on the client side it uses jQuery.

With Meteor you write only in JavaScript, and the result will be a cross-platform application.

This library is created and maintained by a group of developers from the Chrome department at Google.

It is quite powerful in the sense that it allows you create your own HTML elements. It is used by various Google services, such as: YouTube Gaming, Google IO and Google Play Music.

This bookstore was created by Jeremy Ashkenas, and is supported by others, like jQuery.

Has a RESTful JSON interface and it is based on the application design paradigm model called «Presenter-View»; is known to be lightweight, as its only dependency is on a JS library. It is designed to create single page web applications.

Is another one framework based on the «View-Controller» model. It should be noted that the popular social network for companies called LinkedIn was made using this framework.

It is commonly used for create web applications, but it can also be used to develop desktop applications. Example of this: Apple Music.

With Ember you can create your own HTML elements, and allows you to easily work with applications that will handle multiple languages.

This is an object-oriented framework, and it is well documented, which makes it quite easy to extend it to meet any need.

We hope you have learned a lot in this post.

In this blog we talk a lot about web development and programming in general. Take a look at our posts!

What do you think are the best framejorks and libraries for JavaScript? Let us know below!

See you in another article.