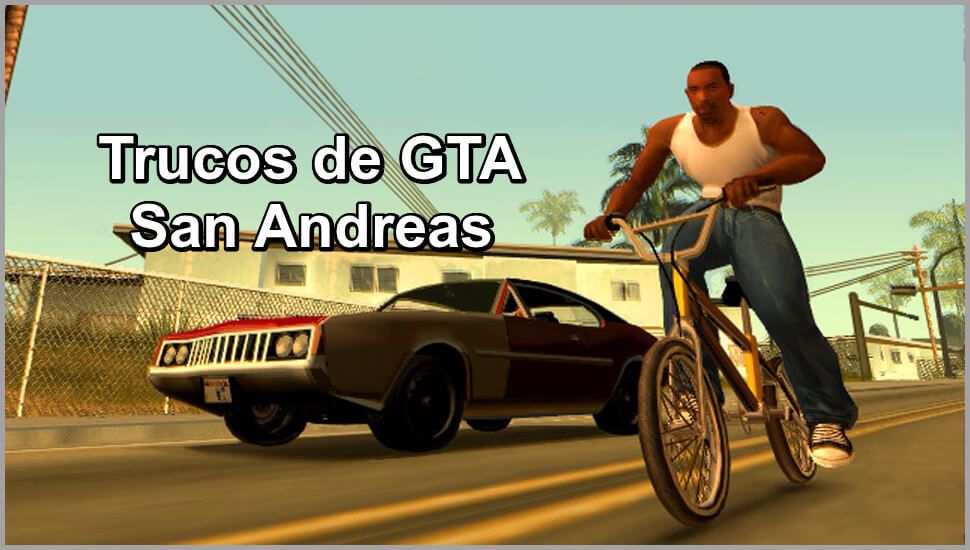 In this post we will show you the best GTA San Andreas cheats that you can apply to both (pc, Xbox 360, Xbox, PS2, PS3 and PS4) and thus enjoy this mythical action / adventure game to the fullest. ENTERS!

Rockstar games has developed titles that have marked an entire generation and one of them is GTA San Andreas, showing a gigantic map (compared to its predecessors), with an addictive game mode, capable of customizing the character as you want, hundreds of places to explore and the best of all is that now the character can swim.

GTA San Andreas It has a compelling story, missions full of betrayal and conflicts that will not let you get out of control. And something that could not be missing in this title are the acclaimed (cheats, keys or commands) making the game experience much more interesting for the fans.

This time you will discover the best GTA San Andreas cheats for PC, Xbox, Xbox 360, PS2, PS3 and PS4, This way you will have no excuse for failing a mission.

To get the most out of these GTA San Andreas cheats, it is recommended that you have at least completely passed the game, in this way you will better enjoy everything that the video game and its missions offer. However, there are missions that for many are a challenge and it will be very helpful to use special commands. Here are the most popular ones:

What characterizes the GTA saga is its range of weapons and San Andreas is no exception, you can have at your disposal an arsenal available to you.

Among them we have: chainsaw, submachine gun, M4 rifle, C4 explosives backpack, bazooka, assault shotgun, pistol with silencer, knives among others. In this way there will be no enemy that can come against.

It is no secret to anyone that the missions in GTA San Andreas They are deadly, so you should always have a way to protect yourself. Within the game you can buy vests and thus have an extra armor always available, but nothing like a key to infinite health and much better if at the time of applying it you win $250k. Remember that the more times you apply this trick, the more money you can get.

Respect to the maximum

GTA San Andreas stands out in the gameplay of being able to increase the player's skills, one of those is respect, in this way your allied band will support you more during a confrontation.

You will never be wanted by the police

To wreck the city of The Saints and its surroundings will be very common in a game of San AndreasIf you don't want to have problems with the authority, you should have this key at hand.

If you want to get out of a hurry, a confrontation against an enemy gang, some policemen or you just want to get to your destination fast, the best way is with a Jetpack.

A quirk of San Andreas it is the possibility of personalizing any car in an extraordinary way, like having "Nitrogen". Thanks to this command, all the vehicles you drive will have Nitrous Oxide.

We recommend you:  TOP 5 horror games for PSP

If you want to delight in the buildings that are in San Fierro, Las Venturas or marvel at the wide fields, the best way is with a Hydra fighter plane, where you will have access to their arsenal of war.

The amazing thing about San Andreas is being able to combine the tricks, once you are in the Hydra try to climb as high as you can and jump into the void. Sometimes the plane gives you a parachute, but in other cases not, if you want to stay alive enter this password.

If you want to go through the city at full speed in a race car, your best option is the “Hotring racer”. This is one of the fastest vehicles in GTA San Andreas and if you add the nitro code, you will have a whole ship.

If you are in pursuit or you are fleeing from a situation, you need to be prepared for a confrontation, the best way is to have the ability to shoot while driving at the highest level and of course a weapon.

Do you want to add some spice to the game? With this key, all pedestrians will start hitting each other and if you are close to one they will also punch you.

With this password you will be immune to blows and bullets, so you can face anyone without suffering damage or repercussions. But you must be careful, as this trick will not protect you from a heavy fall, fire or drowning.

Are you tired of the tranquility of Los Santos and want to make a mess? Get a war tank and get 5 stars.

So much is the freedom of San Andreas that you can exercise your character and turn him into a “Hulk”. To get the super muscles in your character it is necessary to apply these tricks.

Nothing is as exciting as jumping 10 times higher than usual, it is also a very practical key that you can use if you want to escape.

As you will see, they are simple tricks that you can apply from your pc, Xbox 360, Xbox, PS2, PS3 and PS4 in GTA San Andreas. So don't wait any longer, start living the experience and exploring new missions.

We hope you liked the article and we remind you that in our blog you can find more Gaming content that may be of interest to you. Visit us!

Here we leave you some:

Now, these were useful GTA San Andreas cheats both on pc, Xbox, Xbox 360, PS2, PS3 and PS4? Was it easy to apply them on the controls? We hope so, in the same way we await your comments.

Until the next installment!